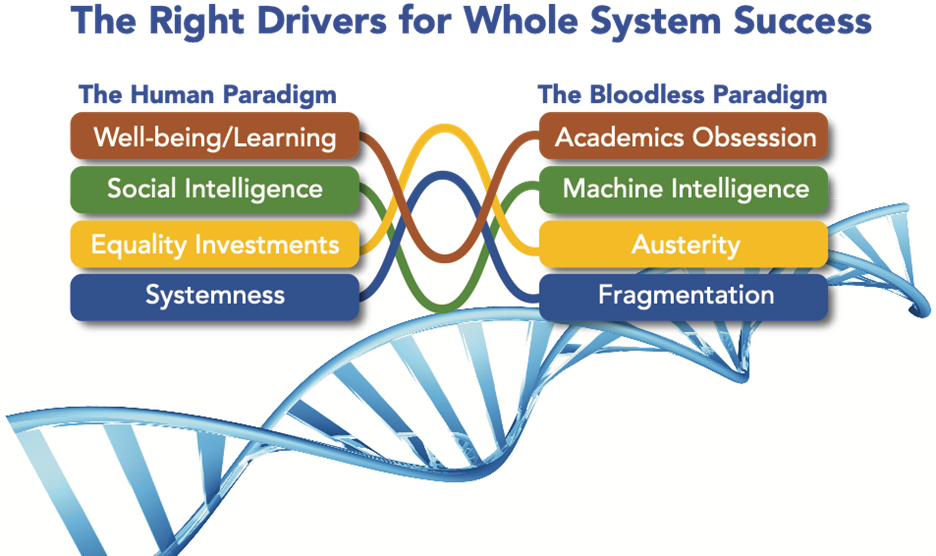 Like many of us in that first year of Covid-19 (2020) I sensed that the extreme disruption might present a once in a lifetime opportunity to bring about substantial system change in learning. Not in the midst of upheaval, but arising from it. I had the idea that I should do a paper on the 10th anniversary of my ‘wrong drivers’ policy paper that was published in 2010 with the Center for Strategic Education (CSE).

For the anniversary paper I would focus on ‘the right drivers’. In October 2020 I deliberately slowed my writing because I wanted the paper to appear, in February 2021 when action could be taken ‘post-covid’. How naïve. We did release the report in February. Now 10 months later, given the nature of the report I think it is time to comment on the initial reception of the Drivers. My intent in this note is not to arrive at the conclusion, but rather to show how the ‘Drivers’ as a set can spark new insights about practical and essential system change. My intent is not to do a review of jurisdictions who are using the Drivers Framework, but rather to show an interest in what use they find it. For example, the Northern Alliance in Scotland (one of 6 Regional Improvement Collaboratives) prompted this note as I began to exchange some ideas with their leaders.

System change of the kind implied in the ‘drivers’ paper takes time and above all timing. Some have argued that nothing fundamental has changed in public education since its’ founding in the 19th century. For my purposes I think we can say that there have been various fits and starts but ‘system-wise’—deep down—the current system has pretty much anchored itself from the 1980s to the present day. As far as timing goes, my sense is that today—this decade—the timing for serious system change has never been better. We are experiencing a wicked attack on humanity (much of it self-induced), an undeniable mismatch of the current system in relation to what is required, and enough good ideas and change players including the very young to warrant (and require) a serious foray into changing the very system itself.

My contribution for starters is the ‘Right Drivers’. I did not say this in the report, but I realize it now that the drivers are best seen as a ‘treasure map’, not a blueprint. No system change worth its salt has ever come about via a blueprint. All system change combines planned and unplanned happenings – planned ideas which fail and succeed (hopefully retaining much of the latter); unplanned events and ideas being sorted to retain the most useful ones. You might say that this has never happened in the past (retaining only good ideas whether planned or unplanned), so why would it be different this time. My answer is twofold: i) because maybe we have a new period of ‘human evolution’ (genetics, culture and consciousness combining for breakthroughs) at work; and perhaps related to evolution ii) many of us, especially the very young—those 0 to 12 years of age for example, may just be in the mood for a treasure hunt to find a new future.

I venture to say that it is no accident that it has taken almost a year for this to occur — for some systems to spontaneously say: “I don’t know exactly why but many of us in this system are reading the ‘Drivers’ report and it is ‘clicking’ with us. They may not know exactly how or why it connects but they do know that these ideas and themes at this particular moment should not be ignored.

In this short note I want to reflect on a few specific things (treasures worth keeping and elaborating on) that I am picking up as practitioners (always learning from those applying the ideas). This is not a complete list but a few promising ideas of where the drivers might take us.

For reference here is the Driver core model:

I will address in this note what new is emerging or become clearer in these past 10 months.

I’ll make five observations: one about the overall framework, and one comment each about the four sets of drivers.

There are two other critical aspects for essential system change. Standardized tests must go and be replaced by new assessments which are already presenting themselves (performance based and pertaining to both academic and practical skills). If equity is to be addressed new pedagogies linking to a range of cultures will be essential. And direct support for non-educational well-being will be required (see my point with respect to Driver number 3 (equality investments).

In short, Well-being/Learning, and Cognitive Skills as a set is the driver.

I intend this note to be an informal commentary 10 months into a new way of thinking about and going about system change—a model that attempts to combine, reconcile and integrate previously separate of missing factors. I look forward to more interaction with systems moving in the direction of a better set of drivers.